Forza 7 DX12 benchmarks are here, and they show AMD’s RX Vega 64 outperforming Nvidia’s GTX 1080 Ti by a significant margin. The racing video game, developed by Turn 10 Studios, officially debuts tomorrow but German site CompterBase.de managed to get their hands on it early producing a radically different outcome than expected.

AMD’s Vega was one of the most anticipated hardware launches of 2017, but the cards haven’t exactly impressed consumers — the RX Vega 64 generally offering performance comparable to Nvidia’s last year GTX 1080. So, it comes as a surprise to learn that AMD’s flagship GPU manages to outpace the GTX 1080 Ti by 23% in the DirectX 12-ready Forza 7.

ComputerBase tested Forza 7 using an Intel Core i7 6850K overclocked to 4.3GHz and 16GB of DDR4 memory running at 3000MHz in quad-channel mode. The drivers used were the Crimson ReLive 17.9.3 for AMD and GeForce 385.69 for Nvidia, both optimized for the racing game.

Furthermore, the graphics options were maxed out, and 8X multisample anti-aliasing (MSAA) was enabled for all three different resolutions tested. So without further ado, let’s dive into the Forza 7 DX12 benchmarks.

Things are even more surprising when it comes to 99th percentile frametime analysis. The test, which focuses on smoothness, shows AMD’s RX 580 and R9 Fury X also ahead of the GTX 1080 Ti. 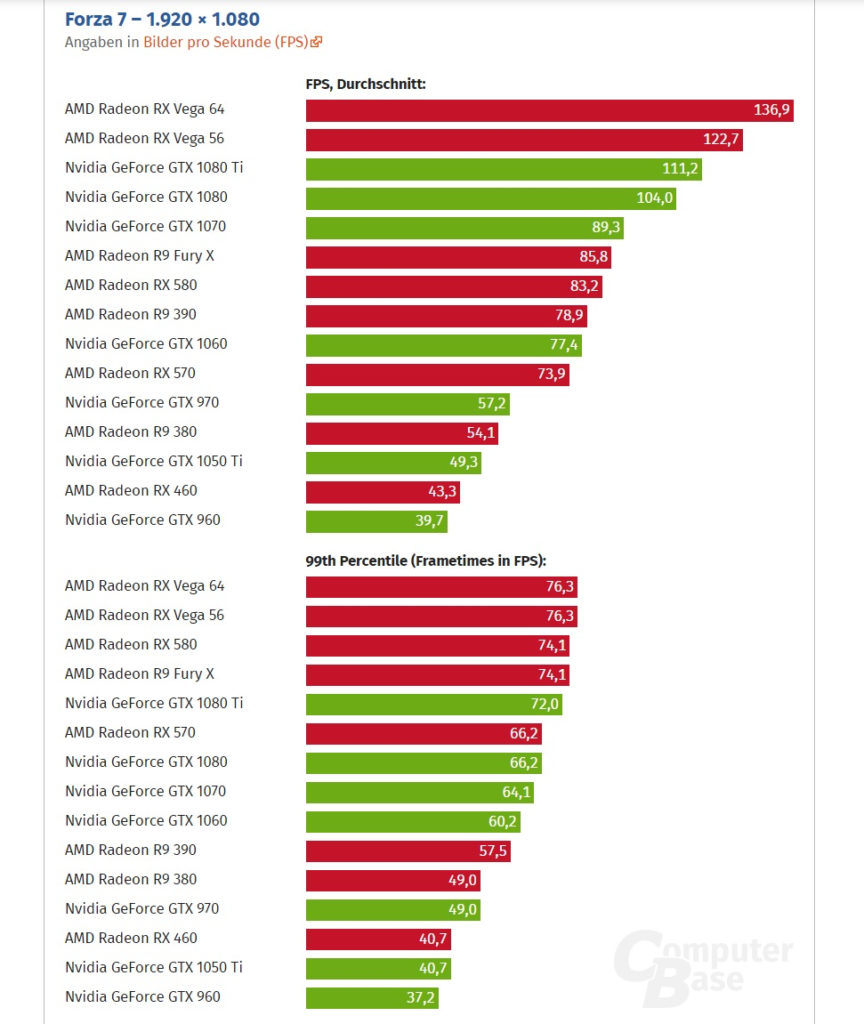 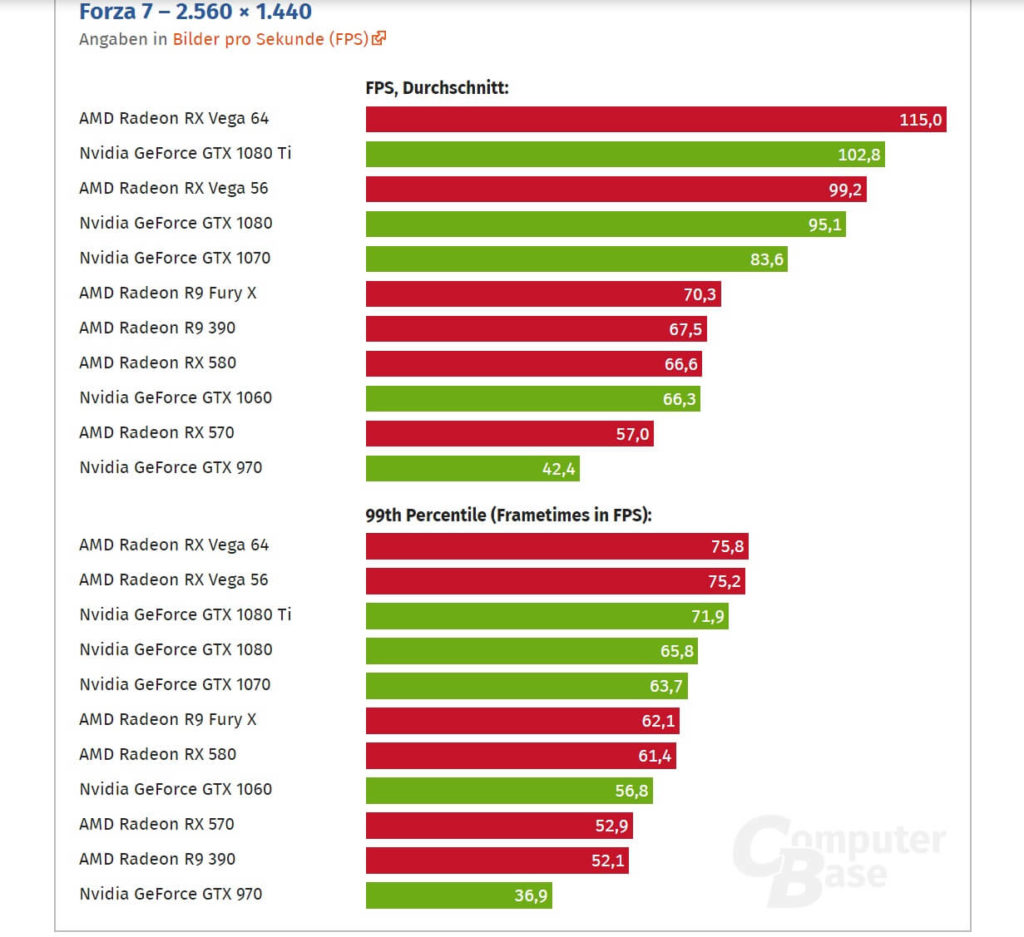 Upping the resolution to 4K (3840 x 2160) finally brings things somewhat back to usual order. The GTX 1080 Ti retakes the top spot, but the lead isn’t huge as one might expect. It is ahead of the RX Vega 64 by just seven fps, but still remains behind both Vega cards in the 99th percentile frametime analysis. 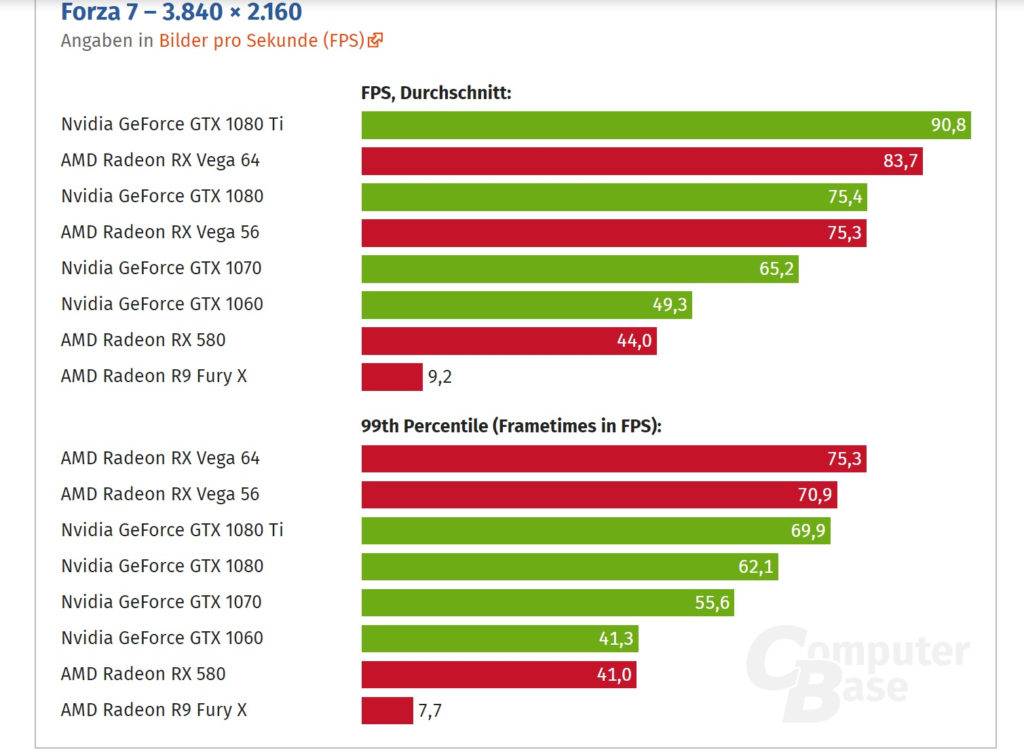 Nvidia confirmed the accuracy of the tests to ComputerBase, saying (Google translated):

The ranking in Forza 7 is very unusual. Nvidia has confirmed [to] ComputerBase, however, that the results are so correct, so there is no problem with the system in the editorial regarding GeForce.

Whether RX Vega can replicate these results in future DirectX 12 games or Forza 7 is merely an anomaly, only time will tell. For now, anyway, things are looking quite good for AMD.

February 20, 2020
Follow Us
Trending
Back to top button
Close
Close