More details on AMD’s enthusiast Ryzen Threadripper lineup have emerged on the web. The information comes from a Greek online shopping portal, Skroutz.gr.

Skroutz listed two high-end, 16-core Ryzen Threadripper CPUs, the 1998X and 1998. Listings reveal general specifications of both processors, although they are more of a confirmation of what we already know.

Allegedly, the website was linked to a major retailer in Greece. While the info on the retailer has been removed, you can still see a basic synopsis of the Threadripper specs. 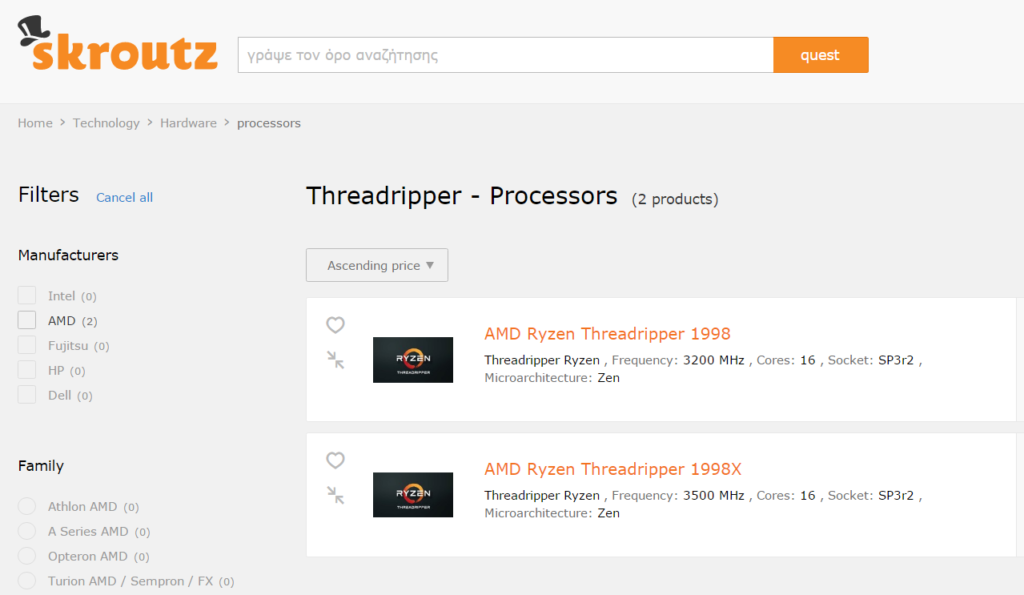 The Ryzen Threadripper 1998X appears to be running at 3500 MHz whereas the 1998 is running slightly slower at 3200 MHz. Both processors have 16 cores and 32 threads, and will be compatible with AMD’s Naples based server SP3 socket, known as SP3r2.

If a previous leak is to be believed, the flagship 1998X will feature clock speeds of 3.5GHz base and 3.9GHz boost with AMD XFR (Extended Frequency Range) feature. The CPU will be rated at 155W which is 5 watts less than Intel’s alleged 12-core Skylake X CPU.

The Threadripper 1998 will run at 3.2GHz base and 3.6GHz boost clock speeds while featuring the same TDP as its elder sibling.

These are the only two processors from the Ryzen Threadripper lineup which have appeared on the website. There will, of course, be others including the 14-, 12- and 10-core CPUs; you can read more about these Ryzen SKUs over here.

AMD’s high-end desktop (HEDT) platform, code named Whitehaven, will include support for quad-channel DDR4 memory and up to 44 PCIe lanes. It will compete directly with Intel’s upcoming HEDT X299 platform and Skylake X CPUs which will feature up to 12 cores.

AMD Threadripper processors not only offer more cores compared to Skylake X, but also more I/O, storage, and L3 Cache. In other words, AMD sure has a potential to unseat Intel from its performance crown before the end of this year.

AMD has already confirmed its Ryzen Threadripper CPUs will hit the market in late June. The company will reveal more details on the lineup in a couple of days at Computex.