At its yesterday’s Next Horizon event, AMD announced fresh details about the upcoming Zen 2 processor design, including doubling the core density and using a “revolutionary chiplet design.” While the event was ostensibly focused on the new Zen 2-based Epyc server chips, the architecture will likely impact the consumer design too.

First things first, AMD has re-confirmed that the Zen 2 architecture will debut next year. According to the red team, this will be a unique multi-chip design featuring both 7nm and 14nm silicon. The CPU chiplet itself will be built on the new 7nm process node from TSMC, but the I/O die that handles all the input and output processes for the Zen 2 silicon, will utilize the existing 14nm technology. 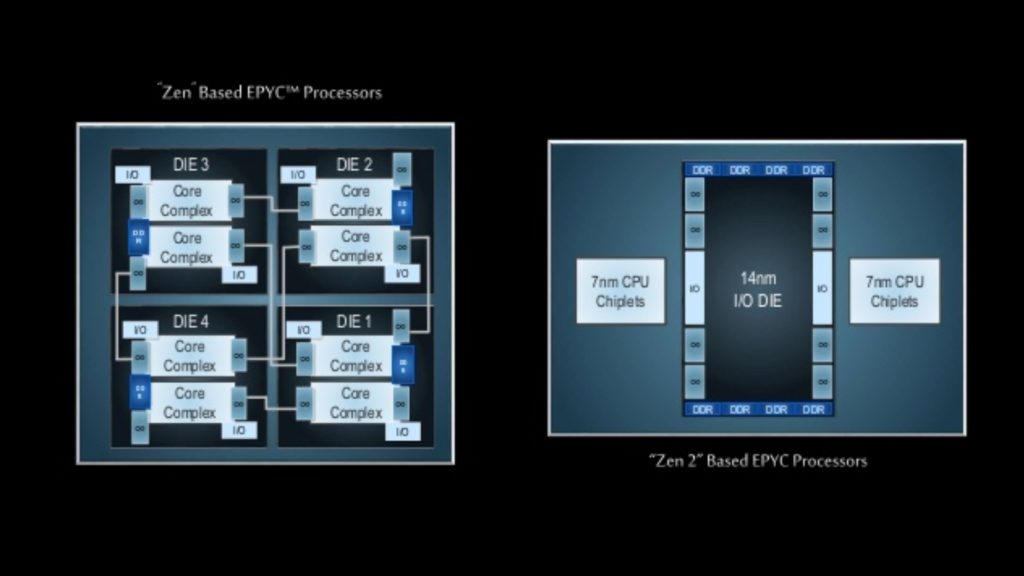 Of course, this next-gen Epyc 2 package will be lined together using the company’s Infinity Fabric, which also makes sure the modular design doesn’t hurt either latency or overall performance. AMD claims the new chiplet design delivers double the throughput thanks to the improved core density and other front end advances.

So that’s how AMD plans to offer that extra performance with Zen 2 we’ve hearing for a while now. In addition, this also hints at a bump in core count for the next generation of Ryzen desktop processors.

And it’s not just about offering extra cores. The 7nm production process should help drop the power demands too. AMD is hoping to cut energy per operation to half, which means it should be able to significantly up the base and boost clock speeds of its processors too.

What’s more exciting is that the red team is already looking ahead to the chips which are to follow this Zen 2 CPU architecture. The latest AMD roadmap shows that Zen 3, on the 7nm+ node, is ‘on track’ and the Zen 4 architecture is already ‘in design.’

Things are looking good for AMD right now, and if it manages to translate the datacenter design down to the desktop in the same way as it did with the original Zen core, then Intel’s dominance could be under serious threat as suggested by the previous Canalys report.