Another day and another leak surrounding AMD’s next graphics card, the Radeon RX 590. This time it comes via a government certification, so may actually be our first official piece of proof of 590’s existence. It’s basically PowerColor’s purported RX 590 graphics card that has hit the Eurasian Economic Union certificate office.

The listing points to an AXRX 590 8GBD5-3DH/OC product code, which is assumed to be the RX 590 Red Devil graphics card. This is virtually identical to the AXRX 580 8GBD5-3DH/OC, the product code for a factory overclocked RX 580 Red Devil with 8GB of GDDR5 memory. 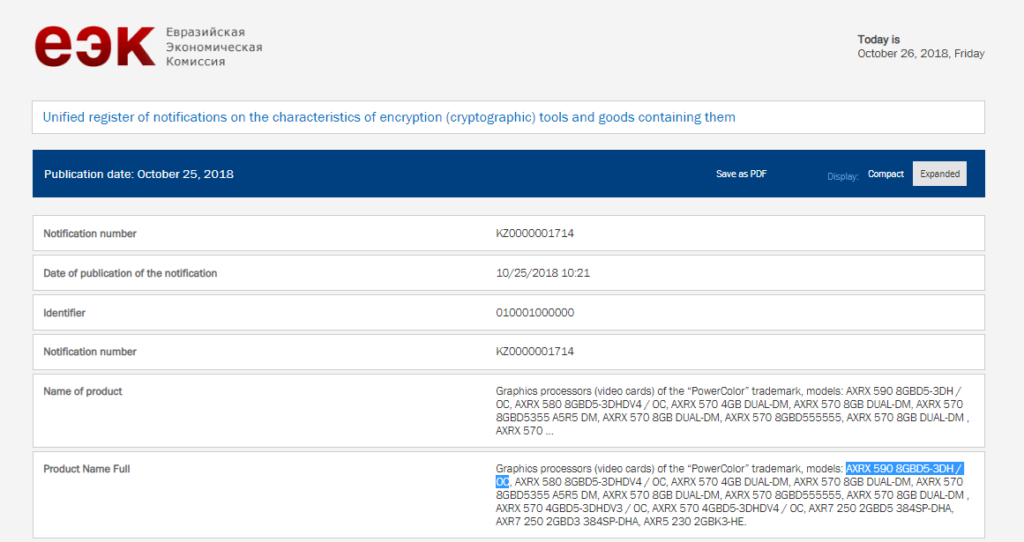 What gives more credence to this information is that it comes from a government organization. And since certification tends to come at the very end of the product development cycle, the launch of the AMD RX 590 could indeed be right around the corner.

That said, the 590 will be built on the smaller 12nm process node versus the 14nm used on Polaris 10 and 20, as well as Vega 10. In terms of performance, the next AMD card will sit between the Nvidia GTX 1070 and GTX 1060, according to a previous 3DMark benchmark.

Of course, until the card is out and we’ve tested it ourselves, you should take the performance claims with caution. While we’re still waiting, Nvidia has already prepared to counter the rumored RX 590 with a new variant of its GeForce GTX 1060 graphics card.

The new GTX 1060 SKU boasts a 6GB GDDR5X memory, which should result in a small but noticeable increase in performance. It will be interesting to see how the latest GeForce card competes with AMD’s Radeon RX 590. Are you excited too? Let us know in the comments below.