The global technology analyst, Canalys, has accidentally leaked the internal training material on its official website. The slides from presentation, which have now been taken down, are aimed at the company’s partners and suggest that AMD may exceed Intel’s CPU performance next year.

Canalys believes that AMD could become a major threat to Intel’s CPU market dominance. It suggests that channel partners should consider team red as a serious contender not only in commercial but also in consumer space. 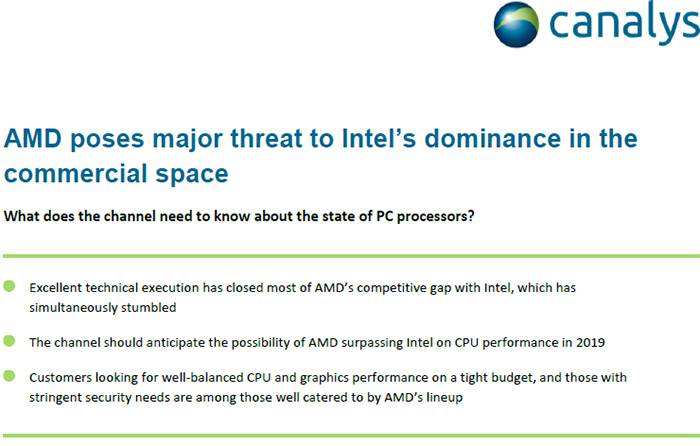 The slides don’t mention which of Intel chips Canalys is referencing to, but it’s safe to assume that they are talking about AMD’s 7nm Zen 2 processors. The Zen 2 is set to launch at some point in 2019 as the Ryzen 3000 “Matisse” series.

We don’t know the exact date of release, but it will take place following the debut of Zen 2 Epyc chips. AMD’s next-gen server grade chips were announced earlier this year, and are set to hit the shelves in the first half of next year.

Canalys’ PowerPoint doc recommends that channel partners push AMD CPUs to a number of different people, including the young workers that do gaming on the side. Below is the list of customers that Canalys asked its channel partners to “pay particular attention” towards:

Generally speaking, AMD has an edge over Intel when it comes to price, GPU performance and security. Thanks to those benefits, the company has seen a rapid growth in the past couple of years. Although, the revenue scale is far from Intel’s $60 billion, AMD maintained a 54% growth rate last year versus Intel’s 3.3%. 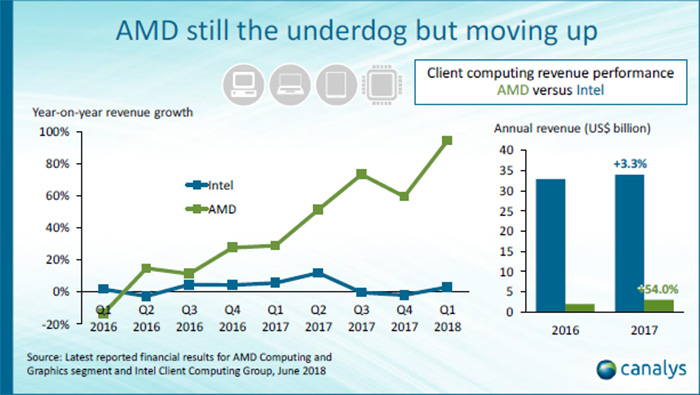 Things are not looking pretty for Intel at the time. The company is facing issues with its 14nm chip production and has to outsource it to rival fab, TSMC. The supply constraints has caused some of Intel partners, including Hewlett Packard, to recommend their customers to switch from Xeon to Epyc on the server side.

In addition, Intel isn’t going to switch to 10nm process technology before the second half of next year, and possibly by then, AMD has already launched their 7nm Zen 2 processors for desktops and cloud’s servers.

While these may be trying times for Intel, the company has a habit of bouncing back with steller product. In other words, we can’t be sure how things play out in the future, but what it looks like is that 2019 is going to be a pretty exciting year for the PC hardware industry.