AMD Ryzen 2 processors are all set to debut on April 19. While we’re still a week away from the launch, team red has confirmed that they’ve already started working on the fourth iteration of the Zen architecture, which would be the AMD Zen 5. Yes, they’ve apparently skipped Zen 4 in favor of next CPU codename.

AMD has released a video showing the top company execs discussing how the last twelve months of Zen have been ahead of the imminent launch of second-generation Ryzen processors. In the same video, chief Zen architect Mike Clark admitted that he’s already working ahead on Zen 5.

The AMD Ryzen 2000 series CPUs are based on the Zen+ architecture, which is basically a 12nm refresh of the original 14nm Zen core. The process optimizations will offer higher frequencies and improved power efficiency, but don’t expect massive performance upgrades until Zen 2.

Built using the 7nm die shrink, the AMD Zen 2 is design-complete and will begin sampling before the end of 2018. In fact, AMD has not only been working on Zen 2, but also the follow-up Zen 3 architecture for a while.

This is part of the new AMD strategy explained by the company’s chief technology officer Mark Papermaster in May of last year. He stated that their leapfrogging teams will always work on “developing the next two generations, at any point in time.” 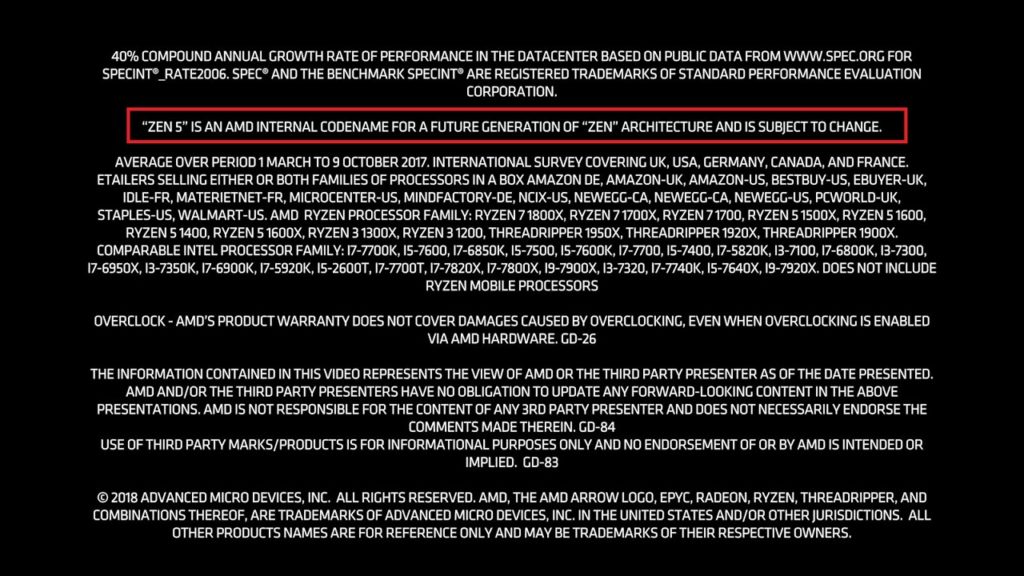 Now that the second-gen CPUs have essentially been finished, it makes sense for the company to move onto designing the fourth-gen Zen chips. What’s a bit confusing, however, is that the codename for their future Zen architecture is the AMD Zen 5.

Team red is planning to jump right over the top of Zen 4, and that seems to be due to the negative connotations associated with the number 4 in the Chinese language. Anyway, Zen 5 isn’t going to hit the market any time sooner than 2021 so the plans may change along the way.