We already know that AMD’s EPYC and Ryzen Threadripper feature different dies, but there’s been much speculation around the server-based processor just being another re-purposed Threadripper chip. Well, renowned overclocker der8auer decided to put the myth to test as he tries to fit an EPYC processor inside an X399 Threadripper motherboard.

As shown in the video below, der8auer takes a 32-core, 64-thread EPYC server processor through its paces to see whether or not it works on the X399 platform motherboard. He uses an ASUS ROG Zenith Extreme for this purpose, which already has a Threadripper 1950X mounted on it.

The test bed doesn’t feature any storage or GPU, but has RAM present so that the motherboard is able to register. Once the 24-pin power connector and Threadripper are removed, the server processor is ready to be mounted on the motherboard. However, there are still a few complications in getting it to work on the board.

First, the standby power won’t show up thanks to the ID pin present on the chip. The ID pin helps the motherboard to determine which processor is being attached to it, and if it’s not compatible, then standby power will not show up. 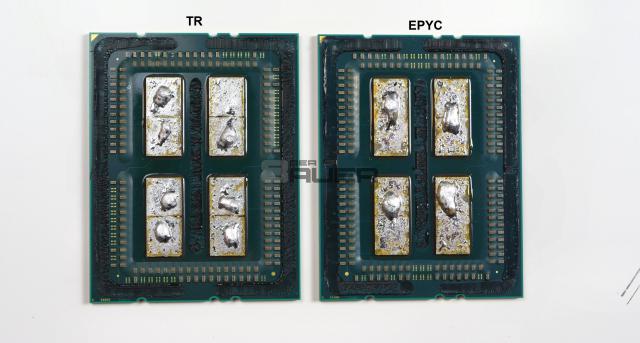 After using hit and trial, der8auer was able to find the the correct ID pin that was preventing the CPU from booting. He applied isolation tape to that single ID pin, and the system finally showed standby power. The CPU did boot in the motherboard, but failed each time at the memory initialization phase causing the debugging LED to light up.

In theory, EPYC can work on an X399 Threadripper motherboard, but you’re going to need a proper BIOS supporting the server chip. You can check out the entire video of the attempt below.