AMD could provide more details on their new Ryzen Gen 2 CPUs at the 2018 Game Developers Conference (GDC) in March. According to the schedule for GDC, AMD is holding an event to discuss the performance optimization of games for “upcoming next-generation Ryzen” family of CPU and APU processors.

AMD’s pre-CES news bonanza included basic details about the second generation Ryzen 2000 series CPUs. Scheduled to hit the market in April, Ryzen 2 will be based on the new Zen+ core that uses GlobalFoundries’ 12nm FinFET process.

The process optimizations will allow for better power efficiency with higher frequencies. You can also expect to see improved dynamic overclocking and better gaming performance, courtesy of the updated Precision Boost and XFR features. 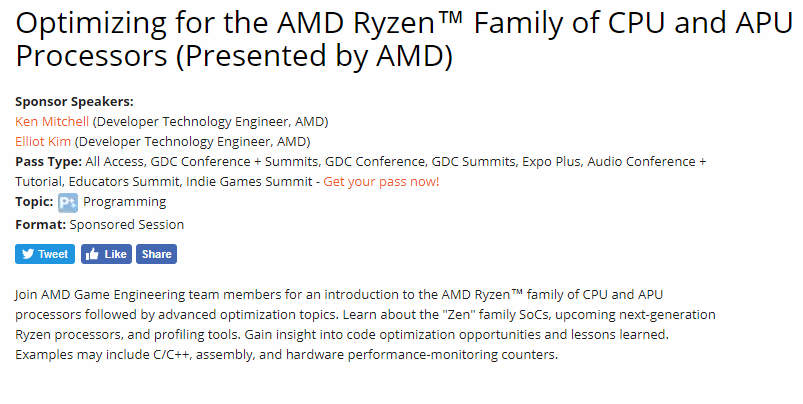 AMD might reveal more on that front at the coming GDC in March, where they are hosting a session about optimizing games for the Ryzen series of CPUs. Hopefully, we’ll get an insight into how much better the new Ryzen processors will be when they hit the shelves in April.

AMD will also launch a new line of X470 chipset motherboards alongside Ryzen 2 CPUs. The platform is said to feature lower power draw and will be optimized specifically for the new processors. Gigabyte has already showcased their Aorus Gaming 7 X470 motherboard at CES, while an ASUS Crosshair VII Hero leaked recently in the SiSoftware database is also likely based on the same chipset.

The Ryzen Gen 2 should not be confused with Zen 2, which is AMD’s next generation CPU core that will be built on the 7nm manufacturing node. Codenamed Matisse, the Zen 2 CPUs are planned for 2019, followed by 7nm+ Zen 3 in 2020. AMD is expecting the new products to offer far more than the usual 7-8% performance bumps we’ve seen of late.

In related news, AMD CEO Lisa Su recently confirmed that they will be splitting their 7nm production between TSMC and GlobalFoundries. Both process nodes will be used to develop different product lines.