Update October 23, 2017: Going top of the line always entails spending a lot of money, and while that is still true of the Ryzen Threadripper 1950X, Newegg is offering one at a pretty nice discount.

AMD’s 16-core flagship enthusiast chip is up for grabs for $879.99, which is $119 off the regular price. The deal is good through the end of October 23 or while supplies last, so hurry up if you’re interested. You can find the processor here.

Similarly, the Ryzen Threadripper 1900X is also on sale for $499.99 on Newegg. This is the first time the 8-core Threadripper chip has fallen below the $500 mark. The sale ends in three days on Wednesday. Go here if you’re interested.

AMD Threadripper 1950X is a 16-core, 32-thread processor which runs at a base clock of 3.4GHz and a boost clock of 4.0GHz. The chip also offers 200MHz of XFR (Extended Frequency Range) headroom for operation at speeds up to 4.2GHz.

Recently, AMD hosted a special overclocking session where its in-house team of extreme overclockers tried to push the limits of the Threadripper 1950X using liquid nitrogen (LN2). The team managed to reach 5.2GHz all-core overclock producing a score of 4,122 in Cinebench. 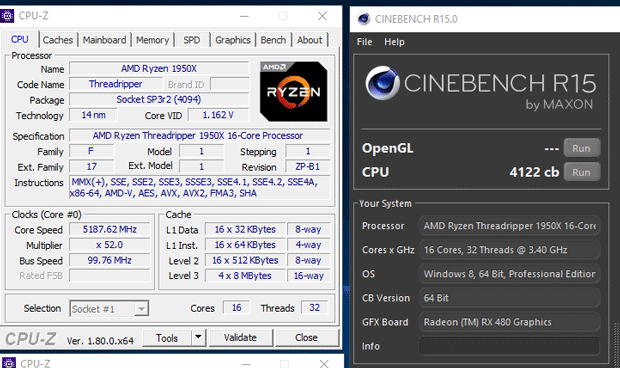 This is the highest score in Cinebench achieved by any 16-core processor – the previous best score was 2,867. The feat was accomplished by feeding extra voltage to the chip while slowly increasing the speed of all physical cores. Additionally, the PCIe lanes were also turned down from Generation 3.

Up until now, AMD has announced three Ryzen Threadripper chips. The other two include the Threadripper 1920X and Threadripper 1900X featuring 12 and 8 cores, respectively, with simultaneous multi-threading (SMT).

The AMD Threadripper chips appear to deliver better performance per dollar value compared to Intel’s Core i9 offerings. For perspective, the Threadripper 1950X scored 2000 points more than the equally priced Core i9-7900X in Cinebench. The AMD chip also sports 6 additional cores as well as 68% more cache than the 7900X.

While the low-tier 1900X won’t run at the same maximum speed as the rival Intel chip, it does feature faster base speed and costs slightly less. Furthermore, the Threadripper chip would theoretically offer better overclock potential that could make up for the low max speed.

Alienware has also launched its Area-51 Threadripper Edition for creators, gamers and megatasking streamers. The system boasts a triad design with Threadripper 1950X liquid-cooled processor, and sets you back a hefty price starting at $2,999.