AMD has trademarked the name ‘Kyzen’ and it seems that this could be a brand for its upcoming 14nm+ Ryzen refresh based CPUs.

Recently, a list of AMD trademarks showed up in the Justia Trademarks database. The company filed to trademark several names including Kyzen, Aragon, Pharos, Promethean, Zenso and CoreAmp. They all sound suitably techie, but which products or brands are they reserved for?

One name we can speculate about with relatively more confidence is Kyzen. AMD has already confirmed in its x86 CPU roadmap that they’ll be releasing a 14nm+ Ryzen refresh before transitioning to Zen 2. Kyzen will likely be the name for these refreshed chips.

This is based on the fact that the name not only sounds eerily similar to Ryzen but is also filed under the same categories as Ryzen. Second, Kyzen seems to be derived from the Japanese word ‘Kaizen’, which is a term used for “continuous improvement.” 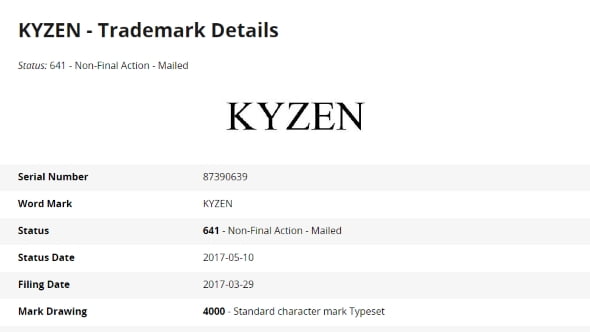 If you remember, AMD filed for the Ryzen trademark back in December last year before announcing it to the public this March. There is a three month gap between publication approval and making it official. This could mean the company will be announcing the Kyzen brand in August, right around when we expect RX Vega to launch.

As for the release, Kyzen could debut in March of next year, a year since the Ryzen launch. The refresh of the Zen architecture will likely last for another year before AMD finally upgrades to the 7nm process with Zen 2.

The Zen 2 would offer genuine new features and significant IPC (Instruction Per Cycle) gains over the current revisions of the Zen core. You can expect the follow-up cores to deliver further 5 – 15% gains. The Zen 2 family of products will be known as Pinnacle Ridge.

The successor to Zen 2 will be Zen 3 which will be based on an enhanced 7nm+ process. The Zen 3 could launch at some point in 2020.