At their Financial Analyst Day, AMD outlined its Zen architecture roadmap to unveil the upcoming Zen 2 and Zen 3 series of processors. But it seems that before transitioning to Zen 2, AMD would release a Ryzen refresh based on a more refined 14nm process.

AMD confirmed it has plans to build a new generation of Ryzen processors that will follow its current Ryzen “Summit Ridge” line of CPUs. The Ryzen refresh will be built using the 14nm+ process which would allow the new CPU models to offer minor incremental updates in the form of higher clock speeds and better energy efficiency. 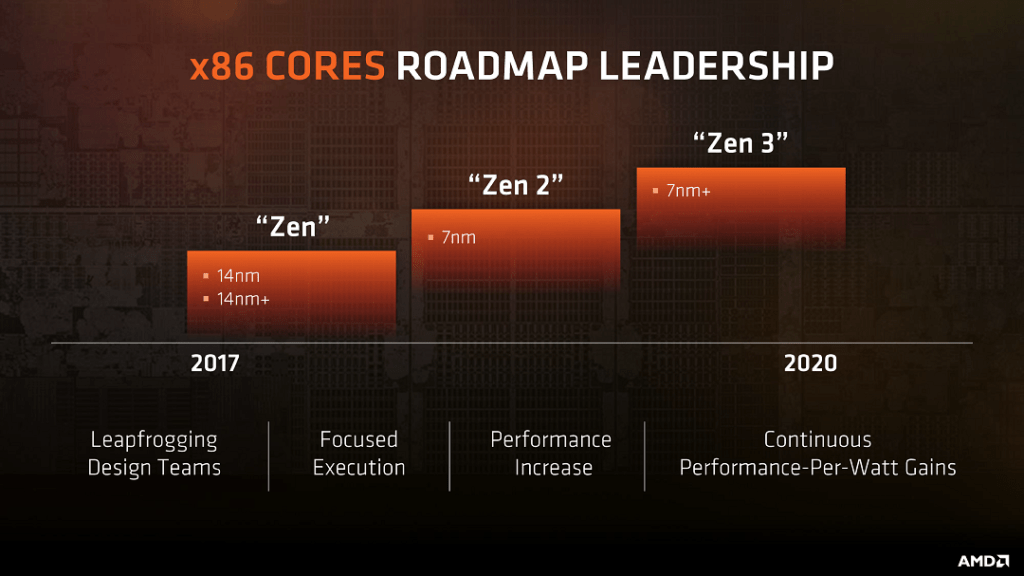 Moreover, prior to Ryzen 3 and Pro, AMD is set to launch its brand-new enthusiast CPU lineup called Threadripper, at Computex 2017. Threadripper will feature up to 16 cores and 32 threads bringing Zen to the high-end desktop market.

The 14nm+ Ryzen refresh will last for another year before AMD upgrades to the 7nm process with Zen 2. It would feature significant increase in performance and IPC (Instruction Per Cycle) gains over the current revision of the Zen core.

AMD already achieved an impressive 52% leap in IPC with its Zen architecture so one can expect the follow-up cores to deliver further 5 – 15% gains. The new family of products featuring the Zen 2 core will be known as Pinnacle Ridge.

Finally, Zen 2 will be replaced by Zen 3 at some point in 2020. The Zen 3 will be based on an enhanced 7nm+ process. According to CEO Lisa Su, the company already has two leapfrogging design teams in place which are dedicated to producing Zen 2 and Zen 3. This is to ensure the follow-ups hit the market in time as per AMD’s CPU roadmap.