Following the release of Ryzen processor series for desktop PCs, AMD is prepping to bring its Zen architecture to the mobile market. At their Financial Analyst Day, AMD announced to launch the Ryzen Mobile chips in the second half of the year.

The company claims its Ryzen Mobile chips will offer a “phenomenal” gaming experience for notebook computers, with a whopping 50 percent increase in processor performance over the existing Carrizo mobile chips.

Not only this but the Ryzen Mobile will also be power efficient operating at half the power of the current chip.

“Ryzen Mobile will have fantastic battery life, you’ll see great performance on productivity applications, and it will have phenomenal gaming experience,” said Jim Anderson, the senior vice president and general manager at AMD. “You’ll be able to get a phenomenal AAA gaming experience on a thin-and-light notebook.”

The increase in gaming performance is in part thanks to their graphics capabilities based on the upcoming Vega core. Vega will outperform AMD’s current generation by around 40 percent. 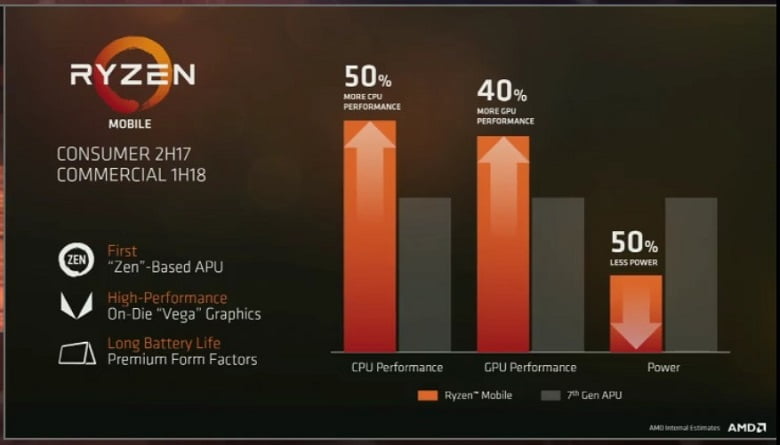 Anderson further revealed that the company has already been working for months with top hardware partners to bring new gaming systems to market. These will include both ultraportables and two-in-one PCs.

For the commercial PC market, AMD is planning to launch the Ryzen Pro. AMD has not yet revealed how fast the new commercial chips would run, but it does believe they will be comparable to Intel’s offerings. The Ryzen Pro will roll out over this year and next.

Along with roadmap discussions of Ryzen Pro and Ryzen Mobile, AMD unveiled its massive 16-core “Threadripper” chip as well as the Epyc brand for servers. The combination of all these products will help improve the company’s profits as the CEO Lisa Su said: “I believe with this product portfolio AMD can be one of the premier growth companies in this space.”