The well-informed Chinese portal Benchlife has posted a roadmap with already known information about the Kaby Lake-R (Refresh) and Coffee Lake, but the footnotes do provide some interesting tidbits.

Reportedly, Intel has decided not to produce quad-core Kaby Lake-H 18W processor, instead it will focus on the Kaby Lake Refresh (KBL-R). Based on the current Kaby Lake-U, Intel’s 8th generation of core processors will be sold as Core ix-8000. 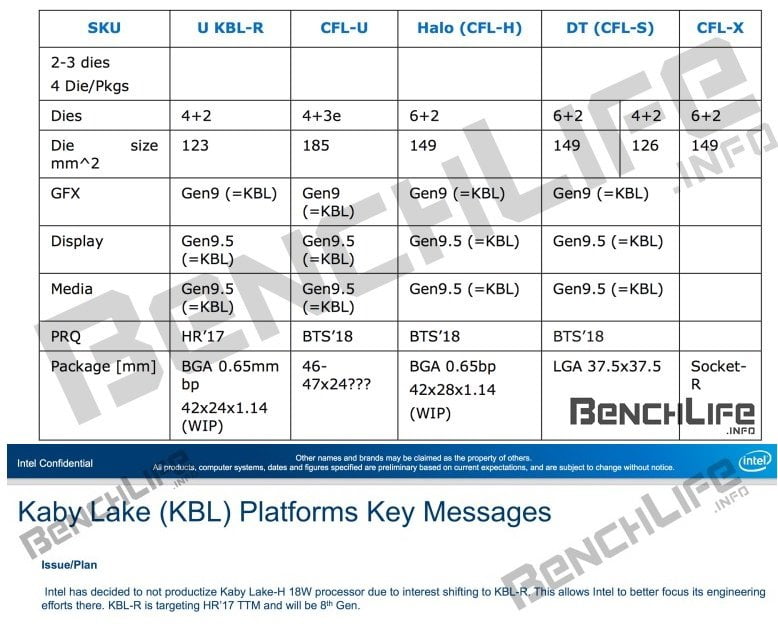 The difference between the U- and H-series lies in the platform used. The U-series chipset is a multi-chip package baked on the same substrate as the processor, whereas the H-series has the processor soldered onto the PCB socket (BGA).

The current H-series processors have four cores which operate at core clock of around 2GHz and turbo frequency of up to 3GHz, with TDP rated at 25W. Since Kaby Lake-R is built using a more refined 14nm process, we should expect similar clock rates at a low TDP.

The 18W variant of Kaby Lake-H was originally planned for Q2 2017. According to Benchlife, the Kaby Lake-R family of processors will launch around the 33rd calendar week of 2017, that is, by the end of August. Assuming the report is accurate, the first products with Intel’s new Core ix-8000 inside, should hit shelves in the fourth quarter next year.

That being said, you won’t see big changes in terms of performance and efficiency until 2018 when Intel will launch the Coffee Lake CPUs.

The Coffee Lake (CFL) will come in various versions, including the first mainstream chips with up to 6 cores and an integrated graphics unit from Intel. The Coffee Lake-S desktop processors will feature two variants: a 4+2 (Quad Core + GT2 Graphics) and 6+2 (Hexa Core + GT2 Graphics). Users would not only get more cores, but they would also be able to take advantage from advanced process technologies and a brand-new Socket R platform.

Similar to desktop parts, Coffee Lake-H series will also get 6 cores, bringing a big update to notebook users who have been stuck with dual and quad core chips for years. Moreover, Intel will launch high-end Coffee Lake-X processors with a 6+2 die configuration, aimed at performance users.

All versions of Coffee Lake will come to the consumer market as Core ix-8000, the report suggests. Intel is expected to unveil first Coffee Lake chips in February 2018.