AMD is reportedly readying an entire top-to-bottom range of Radeon graphics cards based on its next generation Vega architecture. The 2017 family of GPUs, allegedly referred to as Radeon 500 series, will target the high-end enthusiast PC market. In this post, we’ll take a look at previous leaks and rumors regarding the upcoming GPU and discuss AMD Vega release date, specs, performance, pricing and more.

Earlier this year, AMD launched Polaris based graphics cards including the $200 Radeon RX 480, the $180 Radeon RX 470, and the $100 Radeon RX 460. While the Polaris cards offer an impressive DirectX 12 performance against the mid-range GeForce competition, AMD has yet to tap the high-end gaming segment. 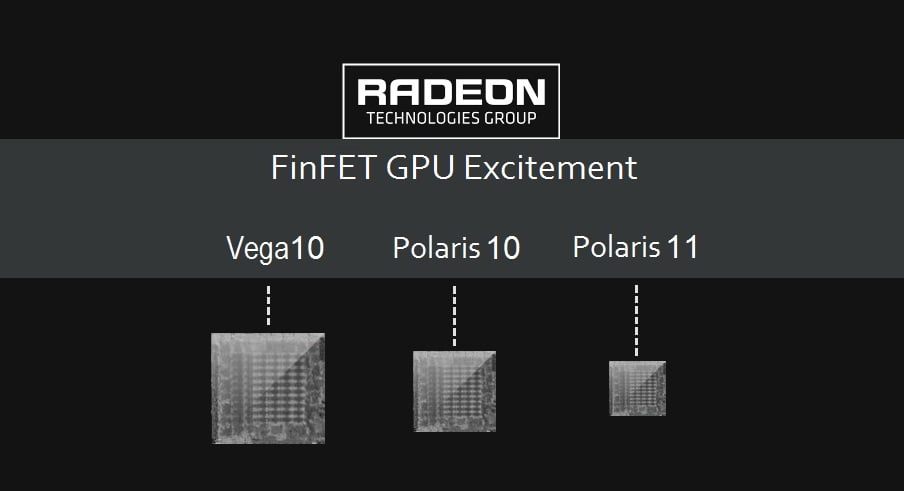 This is where the Vega GPU comes in, that will deliver “significant” performance and power efficiency improvements over the current Polaris architecture, claims AMD. The GPU will be offered in two variants: Vega 10 for the enthusiast market and Vega 11 for the mid-range desktop that will effectively replace Polaris 10.

Quick links to jump to any section:

The teaser shows a person with a red scarf facing toward a bright vertical light. We literally don’t know if there is a hidden message in it, but what AMD does make clear is that this is the first official teaser for Vega GPUs set to arrive early next year.

This also indicates that the marketing campaign for the latest Radeon RX 500 series graphics cards has started, so you should be seeing more teasers in the coming weeks.

The news about Vega GPUs featuring the second generation High Bandwidth Memory as well as GDDR5/X doesn’t come particularly surprising considering the chipmaker has already talked about it.

Earlier this year, Robert Hallock, Technical Marketing lead at AMD, confirmed that the GCN graphics architecture is compatible with both HBM and GDDR5 memory standards.

We have the flexibility to use HBM or GDDR5 as costs require. Certain market segments are cost sensitive, GDDR5 can be used there. Higher-end market segments where more cost can be afforded, HBM is viable as well.

So it’s safe to assume that the high-end Vega based graphics chips will benefit from HBM2, while the mid-range and entry-level products will use cost-effective GDDR5 solution. Though there is no confirmation regarding whether it would be standard GDDR5 or the faster GDDR5X memory.

Being equipped with 8GB of HBM2, the card managed to outperform a GeForce GTX 1080 configured at 1911MHz by 10%. Given the demo system was conducted using an ordinary Fiji driver, AMD should be able to squeeze out more performance out of Vega when using optimized drivers and proper cooling at launch.

The demo also sort of confirmed that the 687F:C1 device ID is for the Vega GPU. To refresh your memory, this is the very same graphics card that we spotted in the Ashes of the Singularity benchmarking database recently, as well as a C3 revision, offering the GTX 1080 level of performance as well.

Related: Vega 10 GPU Will Outperform The GTX 1080 Even in OpenGL, Claims AMD

At the event, AMD also confirmed that Vega makes use of a brand new graphics architecture called Next Compute Unit (NCU). The new design brings several advantages over the predecessor, but the key one is its ability to simultaneously process variable length wavefronts. 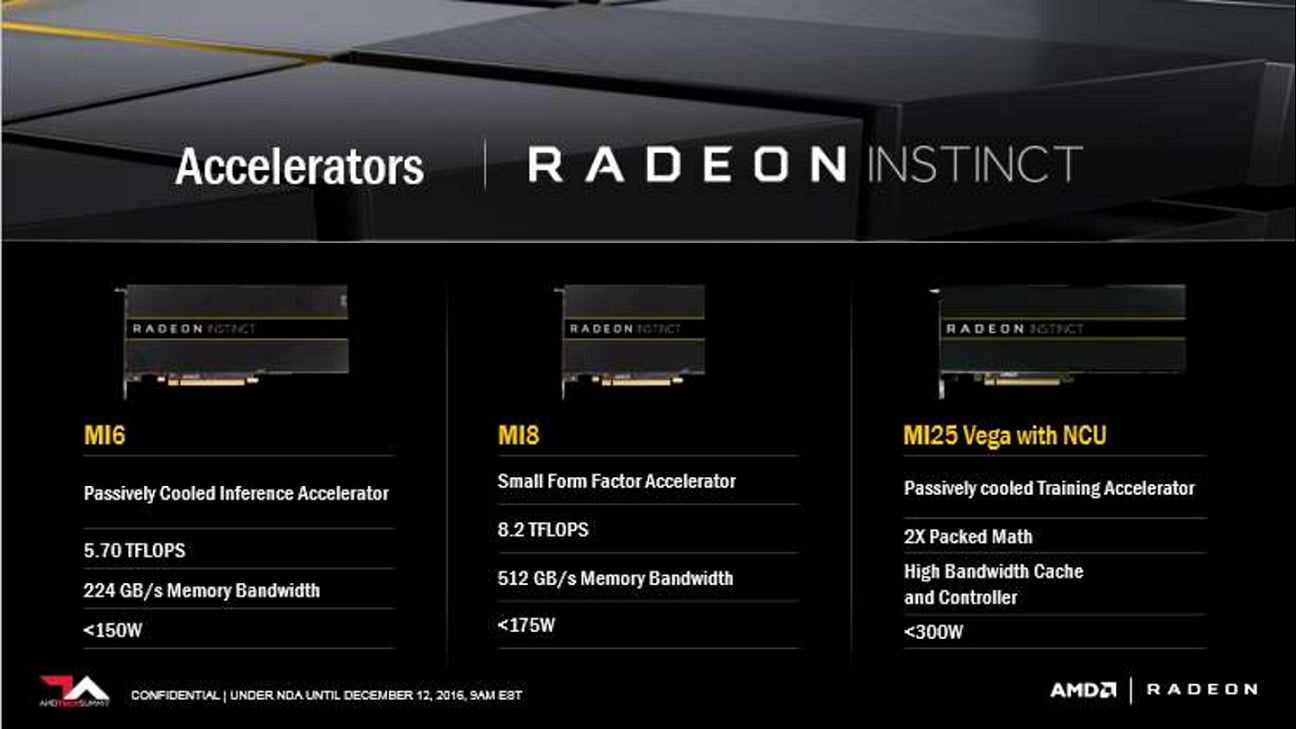 AMD’s current GCN architecture comprises of four 16-wide vector SIMD units. These are capable of executing four 16-wide wavefronts over four cycles; however the problem is these SIMD units work exactly the same no matter which threads they’re fed to.

That is to say each 16-wide SIMD unit has to spend four cycles even if it is to execute a 4-wide wavefront. Since graphics workloads are inherently non-uniform, there’s bound to be scenarios when some of the 16-wide SIMD units are rendered useless.

This is no longer the case with the new Vega NCU, as it is designed to get you more performance out of fewer cycles. The architecture includes advanced schedulers and coherency subsystems that analyze and process several smaller wavefronts simultaneously inside any SIMD capable of accommodating the workload.

This, in turn, would result in each NCU performing considerably more work in a given amount of time compared to AMD’s current design. At present, though, we don’t know the percentage improvement in resource utilization and CU occupancy that Vega NCU brings to the table.

In addition to this, AMD did slip a key specification pertaining to Vega at the New Horizon event. The Vega 10 features 512GB/s of memory bandwidth which indicates that the GPU as 2048-bit wide interface. Although the bus interface is half of that of Fiji, the Vega 10 is able to achieve the same 512GB/s of bandwidth thanks to HBM2 which is rated at twice the speed of the previous generation.

That being said, MI25 is a professional product, equipped with passive cooling solution. So we can expect gaming oriented variant of Vega GPU to reach even higher performance numbers.

AMD has not talked about the number of GCN stream processors on Vega GPU yet. Though Vega 10 is believed to sport 4096 stream processors, as spotted on the LinkedIn profile of an AMD engineer earlier this year.

Assuming the leak is accurate, Vega 10 should operate at a clock speed of more than 1520MHz if it is to achieve the 12.5 TFLOPS of MI25 accelerator. That’s around a 20% increase in frequency over Polaris 10 which is a pretty impressive figure isn’t it?

The AMD Vega GPU will come in different variants offering different levels of performance. The pricing of the Vega based GPUs is going to depend on their relative performance and where the rival graphics cards from Nvidia are priced.

Moreover, AMD could release a GTX 1070 competitor as well, featuring an 8GB GDDR5X memory with price close to $450 mark.

Update (Feb. 1, 2017): AMD CEO Lisa Su has now re-confirmed the Vega release window. The GPU will ship during the second quarter of 2017, following the launch of Ryzen CPU in early March. The Naples Zen server will also launch in the same quarter, while a Zen-based APU, codenamed Raven Ridge, is planned for the second half of the year.

Original: AMD has already confirmed that the company is set to launch Vega family of graphics cards in the first half of 2017, and considering we recently saw the card in action, Vega release date could be just around the corner. 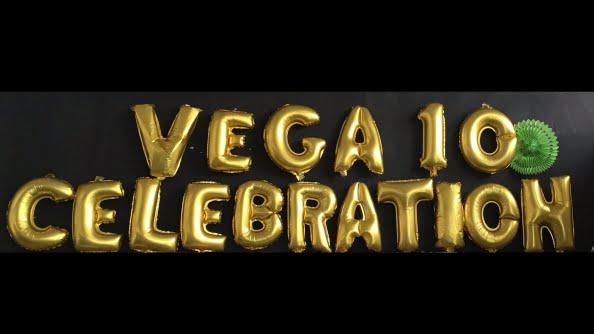 In latest updates, AMD Vega GPU has passed South Korea’s National Radio Research Agency (RRA) certification. The RRA is a regulatory board that conducts tests and approves every silicon based electronics before it’s allowed to be sold to a consumer market. This is a good indication that first Vega GPU designs are almost ready for mass consumption.

We can expect AMD to launch new Radeon graphics based on the Vega architecture at the Game Developers Conference (GDC) 2017, scheduled to held between February 27 and March 3 in San Francisco, CA. In the meantime, the firm could showcase more actual silicon at the Consumer Electronics Show (CES) 2017 in Las Vegas on January 5-8.

That is all we know about AMD’s next-gen Vega GPU. We are keeping our eyes out and will update you when we hear more on the topic. Stay tuned to DigiWorthy!