Today, we’re going to take a look at the GeForce GTX 1050 Ti vs GTX 750 Ti comparison to see how the new Pascal based budget card compares with its older predecessor when it comes to playing games.

I’ve had the GTX 750 Ti in my system for quite some time since it was released back in 2014, and I must say I’ve been more than happy with its performance since then. However, the recent launch of the GTX 1050 Ti at a competitive price tag made me wonder how significant is the uplift in gaming performance that the new card has to offer.

So I’ll be comparing the two cards today with a few games, and discuss whether or not you should upgrade to the new GTX 1050 Ti.

Before we proceed to performance benchmarks, let’s take a quick look at the specifications of both cards. 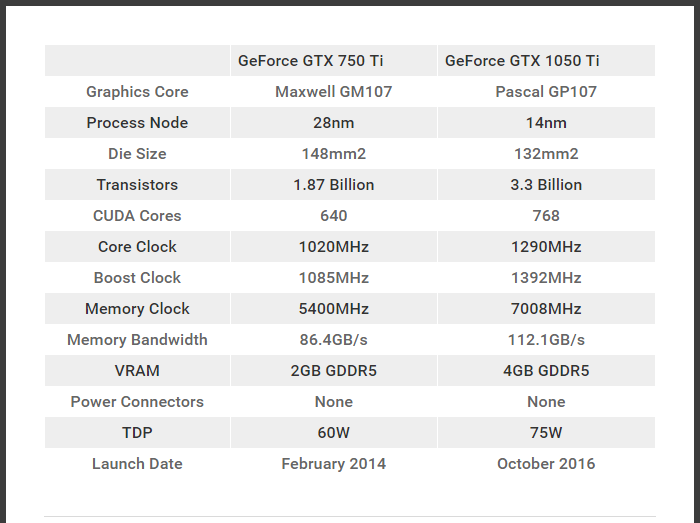 From the specs comparison, it’s obvious that the new Pascal based GeForce GTX 1050 Ti is more powerful and faster than the GM106 Maxwell card. When compared against the GTX 750 Ti, the GTX 1050 Ti offers more than 25% higher clock speed, 2x more memory, more than 2.5x higher pixel rate, around 30% higher memory bandwidth, and the list goes on.

Apparently, the only advantage GTX 750 Ti has over the GTX 1050 Ti is its 20% lower TDP – though the latter delivers massive Performance per Watt gains.

Now, let’s move to benchmark results, and see how the two cards fare against each other in this department. 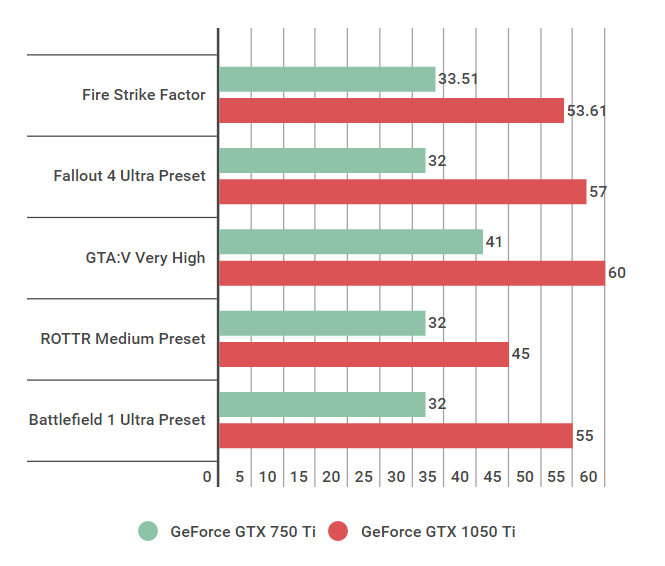 As you can see from results above, the GeForce GTX 1050 Ti does a great job of running these games as expected, and in fact, outperforming the GTX 750 Ti by quite a margin. Of course, there are other cards that offer somewhere of a middle ground between these two, the GTX 950 and GTX 1050 (non-Ti) for example. But, I thought we take a primary look at these two first, as this seems like the best and most logical upgrade path.

It’s obvious from the benchmark results that 1080p is not a problem for either of these two cards, and while the GTX 1050 Ti outperforms the 750 Ti, that’s not to say the latter is a slouch.

We’re using the cards coupled with 8GB of DDR3 RAM and a Core i3 4150 processor. This is sort of a decent system for both cards, as I reckon you’d probably buy one of these either to upgrade an old home PC, or you just want to build something fairly cheap that is still more than capable of 1080p gaming. Both of these two cards can do that with no trouble.

Looking at the specs and performance results, the winner is pretty clear. But, should you upgrade to the GTX 1050 Ti if you already have the GTX 750 Ti in your system? From the looks of things, it has to be a resounding yes.

It’s another $140 to pay, but in the long run I don’t think you would regret upgrading to the GTX 1050 Ti at all. Especially, when you consider that the new card is pretty much on par with the GeForce GTX 960 in terms of performance which means you are really getting quite a lot for your money, and as games start to become more and more demanding, I think the extra power of the GTX 1050 Ti will really make it the better choice.

There you go, folks! I hope this GTX 1050 Ti versus GTX 750 Ti comparison will help some of you out if you’re looking to either buy the new Pascal card, or you just wanted to see what the performance difference would be like.

May 4, 2019
Follow Us
Trending
Back to top button
Close
Close