Motherboard manufacturers recently began rolling out support for Intel’s 7th generation Kaby Lake family of processors. First it was MSI then shortly followed by Asus, and now the Taiwanese board maker ASRock has announced that its entire lineup of 100-series motherboards will support the next-gen LGA 1151 socket processors.

Based on the 14nm+ process, Intel Kaby Lake architecture brings quite a few optimizations over Skylake. The platform offers higher clock frequencies which translate to 12- to 19-per cent better CPU performance over last generation products sold at the same price. It also introduces native support for HDMI 2.0 and HDCP 2.2, as well as hardware-based HEVC 10 bit (4K UHD) and VP9 audio and video decoding.

Intel Kaby Lake desktop processors are due to release in Q1 2017, featuring both unlocked and mainstream chips.

All of the ASRock B150, H110, H170, and Z170 motherboards will be compatible with Kaby Lake via a new BIOS update. The company said in a blog post:

Be prepared for the overwhelming news! ASRock’s 100 series motherboards support Next Generation socket 1151 Intel® Core™ Processors. Via a new BIOS update, ASRock Z170, H170, B150 and H110 series motherboards are resurrected. With only a few clicks, users are able to update the BIOS and enjoy the outstanding performance of next generation Intel processors.

Not only to those high-end and mainstream motherboards, ASRock also takes the latest BIOS to those entry level ones. From the Z170, H170, B150 series to the H110 series, users may expect more powerful processing speed yet enhanced capabilities by Intel’s new processors. 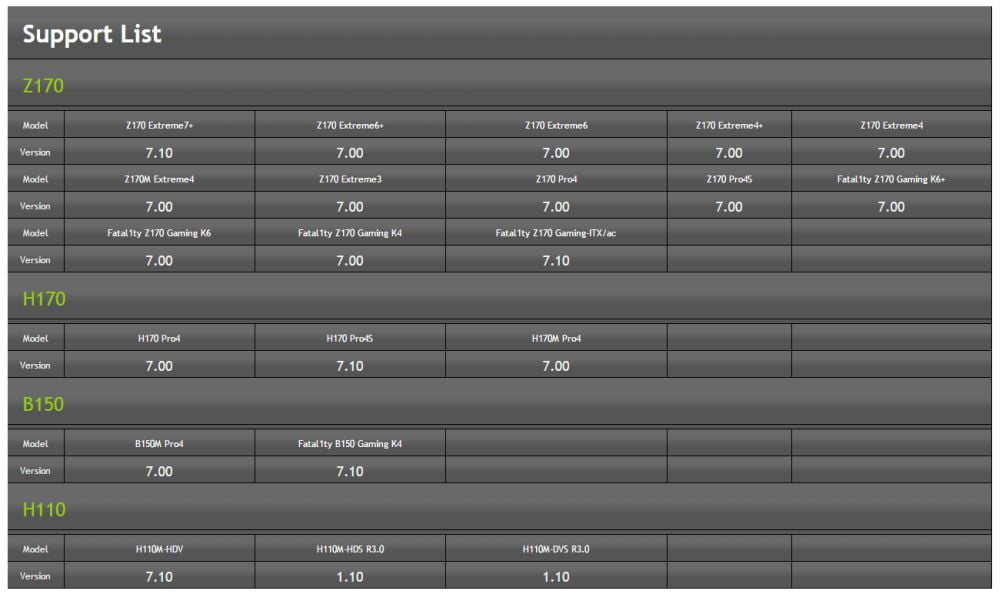 This is a welcome news especially for the mainstream users on current-gen boards who are looking forward to upgrade to Kaby Lake processors. You only have to replace your processor to make the jump which should save you a lot of money for other upgrades – although a 200-series chipset has its own benefits including support for Micron and Intel’s new storage technology known as 3D XPoint.

The BIOS update is available for download from ASRock official web page.