Leaks and rumors regarding Nvidia’s next Pascal-based graphics cards, the GeForce GTX 1050 and GTX 1050 Ti, have been making rounds for a while. Today’s developments show that AIBs might already have tools that support the yet to be unveiled GTX 1050 Ti as the GPU has made an appearance in the MSI Gaming App changelog.

As spotted by an eagle-eyed reader of the tech website KitGuru, MSI has updated its Gaming App to include support and adjust clock rates for the GTX 1050 Ti Gaming series. In fact, the manufacturer added support for the unreleased card back on 22nd Sept, and this is the second time it has tweaked the clock speed to get the best out of the GPU. Here’s the changelog: 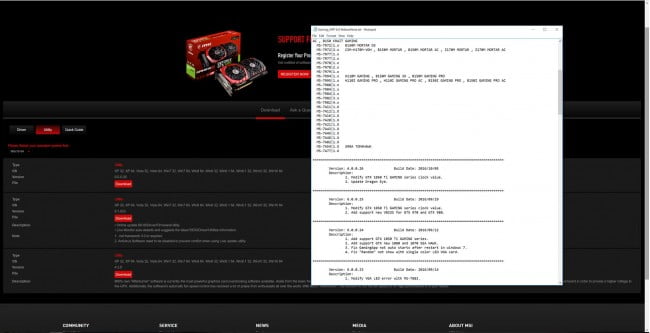 The card is expected to feature 75W TDP which means there won’t be a need for extra connections for power and it should be provided via the PCIe 3.0 socket alone.

In terms of performance, some purported early benchmarks show that the 1050 Ti is a massive overclocker. The card scores 1895 points in FireStrike Ultra, and 2513 points in Time Spy. Based on these results, we can expect the upcoming entry-level card to outperform a lot of custom variants of the Radeon R9 380 and GTX 960 cards.