AMD is rumored to unveil their next-gen Vega 10 GPU later this year. While AMD’s official GPU roadmap confirms that Vega will launch for enthusiasts in 1H 2017, the GPUs being referred to here are aimed at the professional market. Vega 10 will be AMD’s high performance graphics solution that will feature HBM2 memory and deliver a significant Perf/Watt improvement over the current Polaris architecture.

The rumor comes via Fudzilla whose sources suggest that AMD could showcase the Vega 10 GPU at this year’s Supercomputer Show in November though a precise date is not confirmed yet. According to leaked details, this top-end GPU will have 16GB of HBM2 on board and will provide solution for both the server and professional graphics market. At the same time, the company is also planning a cut-down variant with less amount of HBM2. 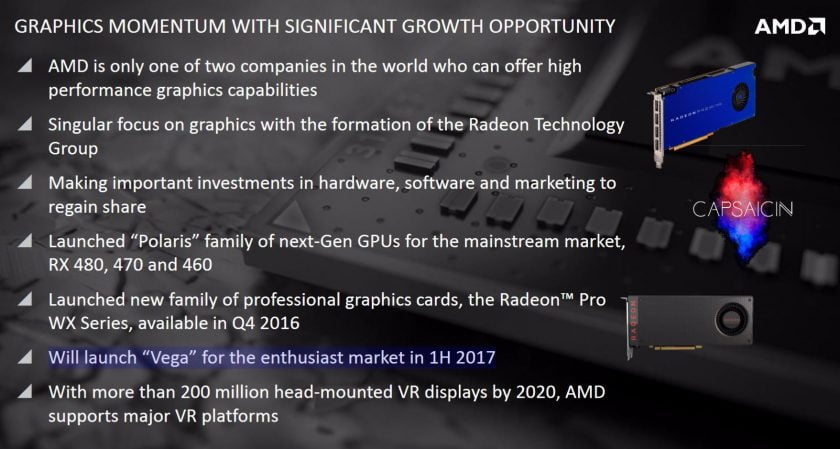 This will be a limited launch and the general idea behind this is to get customers excited about upcoming products and then shipping these GPUs in volume in early 2017. While AMD Polaris is more of a mainstream GPU, the Vega 10 will be aimed at the enthusiast market and should compete directly against Nvidia’s Pascal based GeForce GTX 1080 and GTX 1070 graphics cards.

If previous leaks are to be believed, the AMD Vega 10 will be based on the 14nm GFX9 architecture, with the HBM2 memory clocked to operate at 512 GB/s. The GPU could feature 64 compute units, and 24 TFLOPs of 16-bit compute power, or 12 TF of raw power. The TDP is expected to be rated at around 225W.

Not only this, but AMD is also planning a Vega 20 GPU that will use the 7nm GFX9 architecture. Expected to launch in 2H 2018, the GPU is likely to rival Nvidia’s alleged HPC-focused GV100 chip based on Volta architecture which should be introduced by then.

Spec-wise, AMD Vega 20 is rumored to feature 64 compute units with 32GB of HBM2 memory running full-cylinders at 1 TB/s of bandwidth. The GPU will support PCI-Express 4.0 and boast a TDP of just 150 watts.

As always, take this information with a grain of salt as nothing is official yet.