Could the Pascal-based GTX 1060 on laptops deliver desktop-grade performance? We did benchmark the mobile version of the card using the MSI GE62VR Apache Pro, and the results are really impressive!

Up until now, the mobile GPUs have featured reduced memory bandwidth, fewer CUDA cores and lower performance compared to their desktop counterparts. The transition of Nvidia’s Pascal technology to mobile has however changed the trend. The new Pascal GPUs for notebooks include the GeForce GTX 1080, GTX 1070 and GTX 1060 and yes, they carry no M suffix this time. That’s because they are effectively on par with the desktop versions, and that is what we call a game changer.

The GTX 1080 and GTX 1060 have CUDA core counts and memory bandwidth exactly the same as their desktop versions. Curiosly, the GTX 1070 actually gets more CUDA cores than its desktop equivalent but its boost clocks are lower so it sort of balances out.

This seems too good to be true so I wanted to test it out to see if the mobile version of the GTX 10-series actually does indeed compare to a full desktop card. Have we finally arrived to a true desktop-grade performance on a notebook? Let’s find out.

The notebook I’m using for the test is the MSI GE62VR Apache Pro which boasts a full GeForce GTX 1060 inside. As we already know, the GTX 1060 is actually the least capable Pascal card Nvidia has released so far. By extension, it’s also the cheapest and it draws least power. That means it can fit into a chassis as small as the Razer Blade 14.

Unlike the other two high-end Pascal cards, the GTX 1060 is not based on the GP104 but a smaller GP106 graphics core. The 6GB memory is connected via a 192-bit bus and is clocked at 8GHz effective, delivering a total of 192GB/s bandwidth. The GPU is built using TSMC’s 16nm FinFET process and provides several new features, including support for DisplayPort 1.4, HDMI 2.0b, and improved H.265 video Decoding and Encoding (PlayReady 3.0).

Well, before we jump to the benchmarks, I want to mention that all the benchmarks are comparing 1080p gaming performance as that’s what most mobile and desktop 1060 GPUs will be shipping with as a display resolution. They can barely handle 4K gaming so that’s not entirely relevant. Also, all games are benchmarked at max detail settings.

When compared against the previous flagship mobile GTX 980M, the Pascal based 1060 is up anywhere from 15 to 25 per cent in all the games I tested with each configuration boasting the same CPU, the core i7-6700 HQ. So as obvious, it’s significantly better than the GTX 980M, but now how it does fare against the desktop GTX 1060?

This is bit of a trickier comparison considering the CPU differences are inevitably going to skew the numbers to some extent. Our desktop 1060 gaming data is from an i7-6700K at 4.4 GHz whereas the mobile 1060 has the afore-mentioned HQ variant of the 6700. Moreover, I’ve never tested the GTX 1060 Founders Edition and that the frame rate data is from overclocked GPUs. 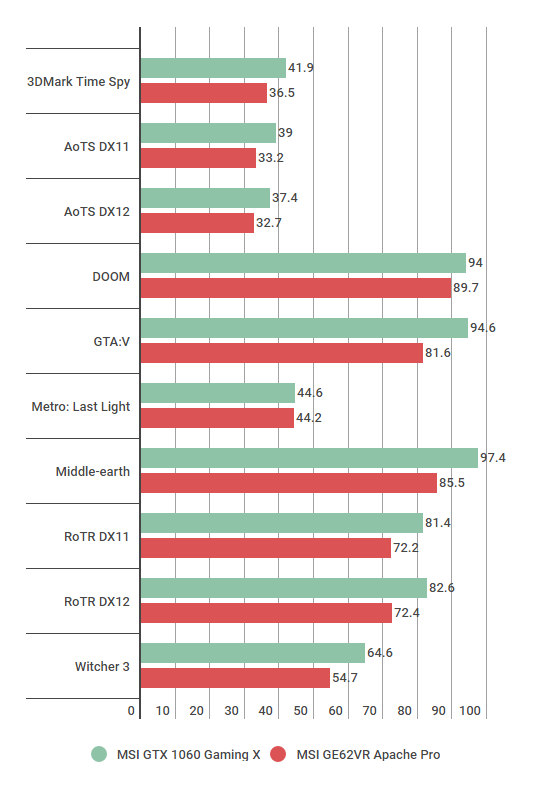 Even with all these limitations, the mobile GTX 1060 stayed at around 88 to 90 per cent of the performance of a GTX 1060 OC. What I’m saying is that the clock speed per centage difference from the mobile GTX 1060 to desktop is more than that. The desktop parts are operating at around 1950MHz and the mobile version only had a max boost of 1860MHz with its actual speed usually falling between 1700-1750MHz. But it’s still freaking showing up to the party.

Overclocking is entirely possible with the GTX 1060 however, the main thing that will likely limit you here is the cooling capabilities of the notebook. In a couple of overclocking errands, I was able to get the core clock up 100MHz extra. But the GE62VR with its thinner size isn’t really meant to dissipate a whole more heat.

Still, the results are significant showing that Nvidia isn’t trying to fluff around with the way they have implemented these mobile GPUs. The mobile GTX 1060 is going to be perfect for anyone who wants to max out their games at 1080p. It also means that MSI putting 120Hz panels on some other GTX 1060 specced notebooks is perfectly reasonable with most games being able to hit 120fps with a couple of settings dropped here and there, which is superb for competitive gaming.

On top of that, the notebook was only drawing 150 watts from the wall during active gaming sessions. That is to say, if the GTX 1080 and 1070 mobile versions are a similar story, we may actually end up having true mobile 4K gaming performance. The actual frame rates may vary from notebook to notebook model, but the mobile GTX 1060 is basically as good as I was expecting it to be.

What do you think? Are you planning on picking up a new GTX 10-series notebook? Let me know your thoughts in the comments below.