Nvidia has just posted job listings that point towards the potential of its chipsets returning to the Apple Mac products.

The current Mac computers are powered by graphics chips from AMD. While Nvidia is dominating the high-end enthusiasts-grade PC market, the team green hasn’t been on Apple’s list for multiple generations of its computer models. But it seems like that is going to change in the near future.

Currently, there are three job listings on Nvidia’s database citing software development for the Mac. In the latest one that appeared last week, Nvidia specifies a software engineer who will “help produce the next revolutionary Apple products.” The successful candidate will be “working in partnership with Apple, their code will define and shape the future of Metal and OpenCL on Mac OS X,” the job ad reads. 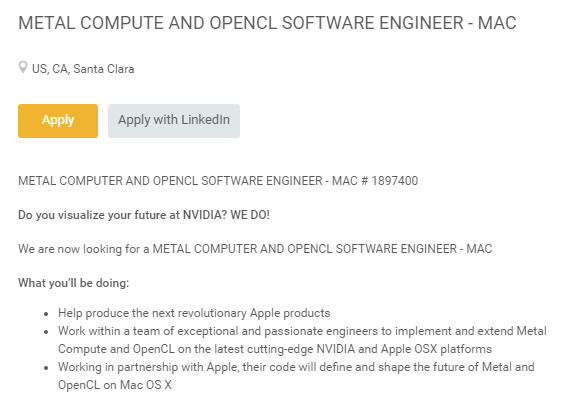 From the listing, we can see that the Santa Clara, Calif.-based chipmaker is working on software that could allow its GPUs to function properly in future Mac products. So it won’t come as surprise if Apple picks Nvidia graphics chips for its next iMac, MacBook Pro, or both.

Most Apple machines feature lower-power integrated graphics processors from Intel. For those who need more performance, there are graphics chips usually available as an option in Macs. The standalone graphics chip from Nvidia would offer significant performance advantages in a number of compute intensive tasks, such as 3D graphics editing, and artificial intelligence workloads.

For Nvidia, the inclusion of its graphics chips in future Apple Macs should help the company strengthen its OEM business by increasing the total gross and operating profit. That being said, we don’t know about the potential timing of Nvidia’s return to Mac products, if that ultimately happens.