With the release of Nvidia Pascal GTX graphics cards just around the corner, the rumor mill is in full tilt. Recently, more details have come in about the memory standard to be featured on the upcoming GeForce GTX 1080 and GTX 1070, along with a few other Pascal specs. But, before we proceed, keep in mind that they are all rumors at the moment as Nvidia hasn’t confirmed anything about Pascal yet.

First things first, you might have heard of the delays in the manufacturing of the second generation of High Bandwidth Memory (HBM2) which is expected to go into production later this year. This basically forced both Nvidia and AMD to postpone the release of GPUs which are using HBM2 until 2017.

So that means, both GPU manufacturing companies are left with more traditional memory technologies which obviously are GDDR5 and a slightly newer and equally exciting GDDR5X. One of the key benefits of the latter is that it provides considerably higher memory bandwidths using the same bus widths. Which means, it can help cut down the power consumption while maintaining the memory throughput required to feed the Pascal chips.

There has been a lot of speculation that Nvidia’s GTX 1080 graphics card, or some people calling it X80, could feature 8GB of GDDR5X memory. Strengthening these reports surfaces a new rumor, via Bits&Chips, which claims that the next generation Pascal GP104 GPU is going to support not only GDDR5 but also GDDR5X memory. The GP104 is the same die which will be featured on both the GTX 1070 and GTX 1080 graphics cards.

Rumor has it that the Pascal based GTX 1070 could just use the traditional high speed GDDR5 memory that will still provide a total bandwidth that is adequate; we’re looking at around 256GB/s of bandwidth which is more than reasonable.

Speaking of the Nvidia’s Pascal architecture, the company at the GTC 2016 unveiled the Tesla P100 featuring its flagship Pascal GP100 GPU. One of the significant changes from Maxwell to Pascal is in the number of CUDA cores per SM (Streaming Multiprocessor). With GP100 GPU, Nvidia opted to place in just 64 CUDA cores per SM, compared to Maxwell’s 128. Besides fewer CUDA cores, the clock speeds for Pascal are also up by 33% than Maxwell. 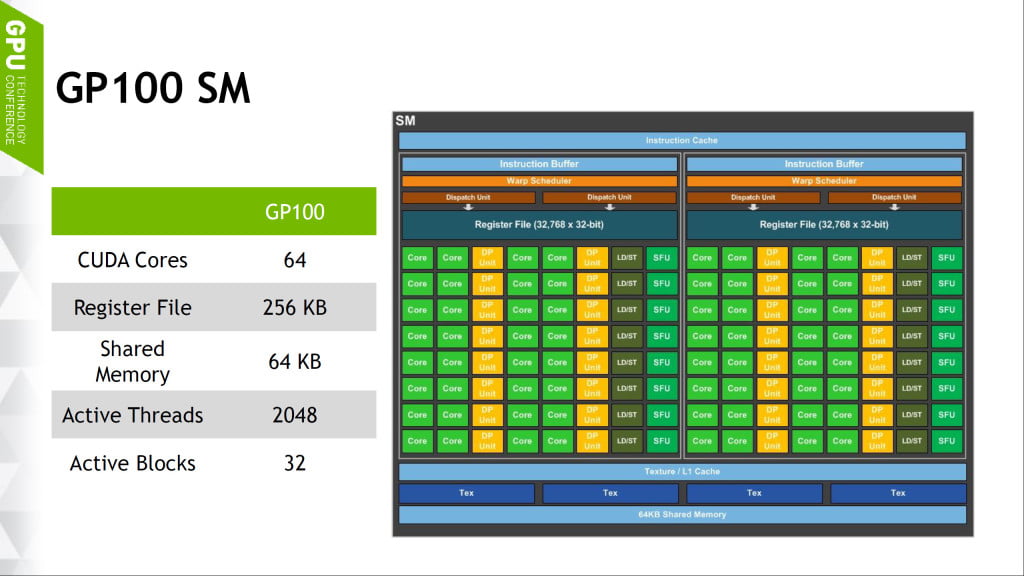 Now, if a previously leaked die shot of GP104 is to be believed then this GPU is almost exactly half the size of GP100, with size measuring roughly only 300mm² large. Which means, the GTX 1080 should feature 3 GPCs and 1920 CUDA cores, given Nvidia maintains the same 10 SM per GPC design. This will allow the Pascal based GTX 1080 to end up being faster than the GTX 980 Ti, while the GTX 1070 should offer speeds between the 980 and 980 Ti.

In addition to this, both these 16nm GTX 1000 series cards are reported to have 3x Displayport, 1 HDMI, and 1 DVI for display connectivity, while taking their power from 2 x 8 pin PCIe power connectors (which is actually more than what the Titan X has).

To remind you again, nothing stated above is official yet, so we would advise you to take this report with a grain of salt. However, it won’t take long before we know what Nvidia has cooked up for us, as the company is expected to detail its Pascal architecture at Computex 2016 in June.